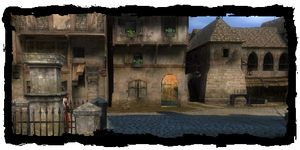 Dom kupca is located in the handlowa, next door to the kanały entrance by the Brama Mariborska and facing the New Narakort district. It is the home of Hobbs Pankiera, a nobleman and his daughter, Rozalind.

Rozalind has been forbidden to leave her room or entertain anyone since being caught taking "music lessons" with the poet, Jaskier in a state of complete undress. She did keep a little memento of her tryst, though: his lutnia.

Hobbs is also a potential walka na pięści opponent, depending on Geralt's diplomatic skills during their initial meeting.