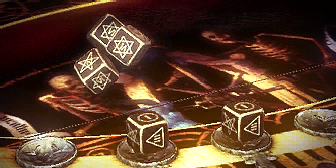 Dice poker once again makes an appearance as one of the mini-games in Wiedźmin 2: Zabójcy Królów‎. Due to its inherent reliance on sheer luck, it is not a good way of making money.

The game is essentially unchanged from the original game, except that you now must physically "roll" the dice and you have the possibility of losing one or more of them if they roll off the playing surface. The game now also takes one round only so there is more room for luck and less for tactics.

Compared to the first game, the camera angle at which the board is shown and the results of the rolled dice are more difficult to parse, making it more difficult to get a general overview of the situation. Another less than desirable change, the quick view of the current dice combinations for each player after the initial roll has been taken away resulting in a less accessible mini-game.

The gambling aspect is also weighted against the player; the most that Geralt can bet is 10 orens on the first round and another 10 on the second, however the opponent can potentially raise Geralt's initial bet by another 10 orens and his second bet by another 10 orens (which they will only do if they have a good hand), effectively meaning that the stakes are going to be higher when the opponent has a good hand than when Geralt has a good hand, so on average you stand to lose more than you gain, all other things being equal.

It is possible to save before starting playing and then saving again if you win but relaoding the save if you lose, thus only ever winning games, however this is a very slow and tedious way of making orens.